The fourth concert of the 154th season of the Michigan City Municipal Band (MCMB) will be held Thursday, June 30, 7:30p, at the Guy F. Foreman Bicentennial Amphitheater in Washington Park. The concert will celebrate Independence Day.

The June 30 concert repertoire will be:

John Philip Sousa composed The National Game in 1925 to celebrate the 50th anniversary of baseball’s National League. Mr. Sousa was a baseball fan, and the Sousa Band had its own baseball team, on which Mr. Sousa served as pitcher. Audience members will hear baseball bat solos in the final section of the march, and will be encouraged to cheer when our batters get a hit!

Soprano Anne Marie Bice will be featured on two of the most famous songs in the great American song book: Someone to Watch Over Me by George Gershwin, and Moon River by Henry Mancini and Johnny Mercer.

Castles in Europe is a Ragtime march by James Reese Europe, who became the first African-American bandmaster in the US Army. Maestro Europe was famous throughout the United States before World War I with his society orchestras, which were somewhat similar to ensembles like the Sousa Band. Mr. Europe’s society orchestras played lots of Ragtime and Jazz, and were among the first to record Jazz music. James Reese Europe became known as the “King of Jazz.” At the height of his fame, and with the Great War just underway, James Reese Europe enlisted in the New York National Guard. Lieutenant Europe was charged with forming an outstanding band. His band became the 369th Regiment, and was the first African American regiment sent to France. The 369th Regiment earned a reputation for being especially tough in combat. 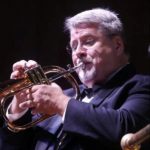 We’re thrilled to be collaborating with Charles Steck, conductor of the LaPorte City Band. Maestro Steck will guest conduct two selections with the Michigan City Municipal Band. American Riversongs was created by Pierre LaPlante, and includes many famous songs, including Shenandoah, The Glendy Burke, and Down the River. On a Hymnsong of Lowell Mason is based on the famous hymn My Faith Looks Up to Thee. It is especially appropriate, because the hymn’s composer, Lowell Mason, is considered the father of American music education.

John Williams celebrated his 90th birthday on February 8. His composition, A Prayer for Peace, was composed for the 2005 film, Munich.

I’m a Yankee Doodle Dandy; America; America, the Beautiful; and The Battle Hymn of the Republic.