The third concert of the 154th season of the Michigan City Municipal Band (MCMB) will be held Thursday, June 23, 7:30p, at the Guy F. Foreman Bicentennial Amphitheater in Washington Park.

The June 23 concert repertoire will be: 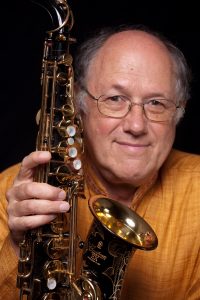 Guest soloist will be George Wolfe. Dr. Wolfe is Professor Emeritus at Ball State University, where he taught saxophone performance and chamber music for 32 years. He has performed extensively throughout the United States, and has also concertized in Europe, Cyprus, Costa Rica, Canada, India, Korea and Japan. He has been heard on radio stations across the US, and has appeared as a soloist with such ensembles as the Royal Band of the Belgian Air force, the United States Navy Band, the World Band at Disney World, the Medalist Concert Band in Minneapolis, and Windiana Concert Band. Critics have praised his playing as “brilliant and moving.” John Lambert, writing in the Winston Salem Spectator, described Wolfe’s performance as “a deeply satisfying and moving artistic experience.”

Dr. Wolfe holds a Performance Certificate from Indiana University, where he studied with Eugene Rousseau and Daniel Deffayet. He is featured on eight volumes of the compact disk series America’s Millennium Tribute to Adolphe Sax, distributed by Arizona University Recordings. He has presented master classes at the Paris Conservatory, Indiana University, and the Interlochen Center for the Arts.

Dr. Wolfe will perform two solos with the MCMB: Lightnin’ by Rudy Wiedoeft and Hugo Frey, and Persuasion by Sammy Nestico. Rudy Wiedoeft was one of the early saxophone virtuosos. He made more than 300 recordings, and is credited with helping to popularize the saxophone (invented by Adolphe Sax in 1840) in the USA and Europe. Sammy Nestico was one of the most successful jazz composers of the last 50 years. He is perhaps best well-known for his compositions and arrangements for the Count Basie Band. Persuasion is a beautiful ballad.

Tudor Sketches is William Owens’ interpretation of The House of Tudor, a royal European family that ruled the kingdoms of England and Ireland in the 15th and 16th centuries. William Owens is one of today’s most successful band composers, having published more than 200 works at all different levels. Mr. Owens is a native of Gary, Indiana. Among his many accomplishments was being commissioned by the Indiana Bandmasters Association to compose for one of the all-state bands in Indiana’s bicentennial year. His work, Constitution Elm—played by the Michigan City Municipal Band in 2018—commemorated our state constitution.

Dr. Guy Forrest Foreman was conductor of the Michigan City Municipal Band for an incredible 60 years! Dr. Foreman was also a music educator in LaPorte for 35 years. He died in 2017. During his career, Dr. Foreman had seven compositions and arrangements published. Folk Songs of Britain was arranged by Dr. Foreman in 1958. Within the setting, we will hear Drink to Me Only With Thine Eyes; Flow Gently, Sweet Afton; and The Girl I Left Behind Me.

One of the most creative popular music artists today is Lady Gaga, who has performed everywhere from the SuperBowl to duets with Tony Bennett. Among the best-selling musicians of all time, Lady Gaga has sold more than 120 million records, and she has won 13 Grammy Awards. Ted Ricketts’ arrangement, entitled Lady Gaga Dance Mix, contains Poker Face, Bad Romance, and Just Dance.

Anthem for Peace is a gentle and lovely composition by Ed Huckeby. Dr. Huckeby is a former president of Southwest Christian University in Oklahoma. He was a teacher and administrator at two other universities in Oklahoma, an arts administrator for the Tulsa Ballet Theatre, and began his career as a high school band teacher. He has published over 200 band compositions.

A new version of the classic film musical, West Side Story, was released in 2021. The 1957 musical, with lyrics by Stephen Sondheim and music by Leonard Bernstein, was inspired by William Shakespeare’s Romeo and Juliet. The setting was 1950s New York City, and the characters were teenagers from rival street gangs. Highlights from West Side Story includes I Feel Pretty, Maria, and Tonight.

Alberto Pestalozza was an Italian composer who lived from 1851-1934. His most famous composition was a waltz called Ciribiribin, written in 1898. Ciribiribin was recorded by many famous artists, including Harry James, Frank Sinatra, Bing Crosby, and the Andrews Sisters.

Our patriotic audience sing-along will be From Sea to Shining Sea, which is Maurice Whitney’s arrangement of America, the Beautiful.